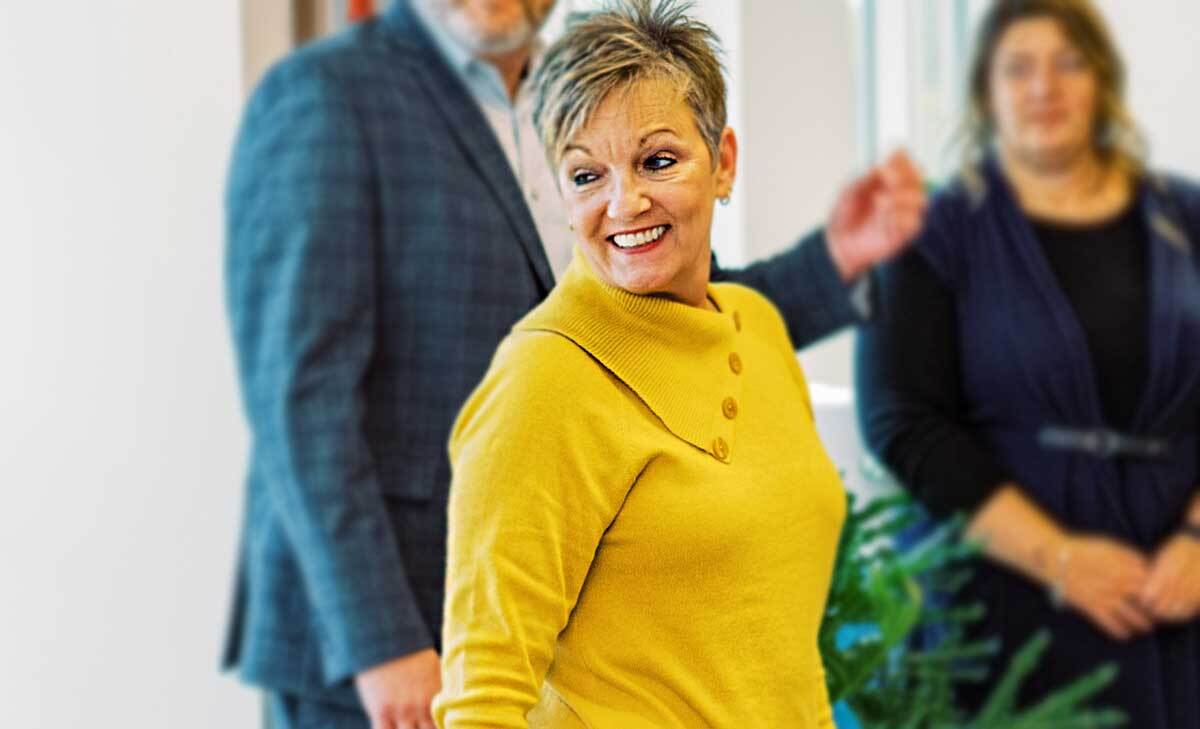 If you’ve ever talked with our accounting department, you’ve likely come in contact with Janet Spencer (or Jan as we often call her here) Quore’s Accounting Manager. Jan takes care of all of Quore’s banking functions, invoicing, payables, payroll—pretty much anything and everything to do with handling money at Quore.

Jan is not only an integral part of our team, she’s a force to be reckoned with. She is fiercely herself, and she treats each of our customers like family. If you’ve ever met Jan, you know she’s full of joy and honesty. She’ll always be there for you, but If you’re extremely late on your bill, she might have playfully threatened to come and rap your knuckles like an agitated school teacher with her favorite purple ruler! All jokes aside, Quore likely wouldn’t be where it is today without Jan helping with all things accounting. We’re lucky Jan loves her numbers.

“I’m not gonna tell you what year I graduated from high school!” she laughs, “But when I graduated I went straight to vocational school to take accounting courses.”

Jan always knew she wanted to work with numbers, and equally important, she wanted to help people. She wanted to be a valued member of a great team of people. So when she started her career in finance, she worked in every kind of accounting job there was, looking to help people handle their banking information and produce financial statements. For most of her career, she worked with CPAs, doing the payroll, writing checks, handling banking information and producing financial statements.

But she’s always been a hard worker, and after she had children, she spent her time after-hours working a second job in retail to help support her family. She didn’t mind working the extra hours, and liked to keep busy.  When her children grew up and began their own pursuits, she moved to Tennessee and started focusing solely on accounting. That’s where she eventually found herself on the hunt for a new job.

It will come as no surprise to anyone who knows her that Jan quickly had several opportunities on the table. She had years of accounting experience with a variety of companies under her belt. But while she was ready to take on a new position, she wasn’t quite sure she’d found the right company “fit” for her yet. Something told her to hold off—she had a couple of other interviews she wanted to pursue first.

She wanted to find somewhere where she could connect with her team, where she felt like she could be herself. So she continued her search.

Most people might not pick up the phone for a job interview on New Years Eve. But Janet Spencer did.

“On New Years Eve of 2015 Kalie Wilcox from Quore called me and we talked for about an hour and a half,” she says, “After that call, I went to Franklin and interviewed in person.”

As soon as she met with the team at Quore, she knew it was the place she needed to be. There was something special about the small, growing team. Everyone made her feel welcome and at home. She didn’t feel like it was the kind of place that discouraged chatting with your coworkers during the day or kept people from being themselves at work.

When Quore made her an offer, she didn’t hesitate to accept it.

Jan was one of Quore’s early employees, back when the company was made up of only about 15 people or so! She loved that the company and the team were small but mighty, and that her skills felt truly needed. She jumped right in helping Quore sort the books and manage banking transactions. It was exciting to be a part of such a fast-growing team. But as Quore continued to grow, taking on dozens of new customers and employees, it became clear that manual billings, collections and payroll needed to adapt with the growing company.

Not only was Jan managing payroll and financial statements, each month she generated invoices and distributed each one out to our customers. Then she would switch hats and become the entire accounts receivable department, personally contacting customers with late payments. It took her about a week to get it all done! As more and more hotels started to sign up, the accounting team expanded to support Jan and grew into more of the department that it is today.

More than a Team

Now, Jan can’t imagine herself anywhere else. She not only loves the work she gets to do here, but she loves her coworkers that make up Team Quore, too. She sees Quore as more than just a team and more than just a workplace.

“Everybody here is my family. I have never worked—in all my years—for a company that made me feel as much a part of something as Quore does. I feel like I could call on anybody in this office, anytime day or night, and they would come to my rescue,” says Jan, “you don’t find that just anywhere.”

She’s right. And you don’t find Janet Spencers just anywhere either. So we’re glad we have her… and not just because she makes sure we all get our paychecks.