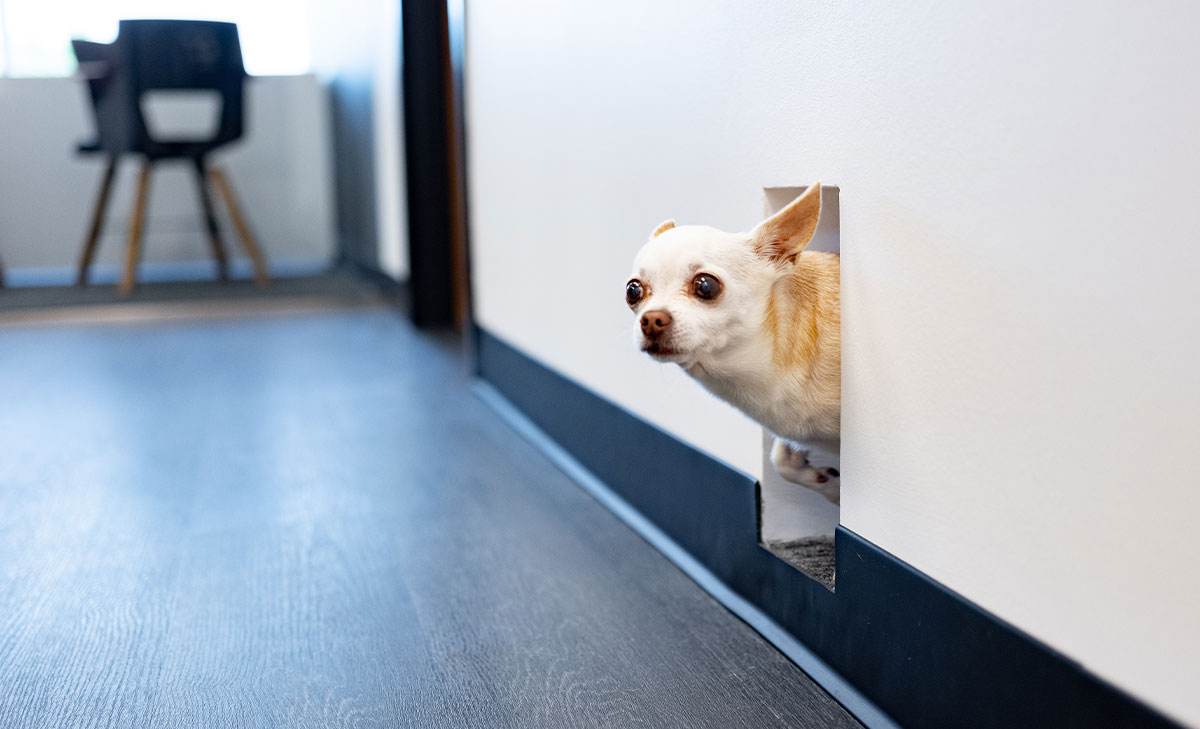 It’s a peaceful day at the Quore office. Sunshine pours in through the windows as the sun rises. Various Team Quore members arrive for the day, filling their desks and their coffee mugs. It’s quiet, until, suddenly: the scuttle of tiny claws clicking against wooden floors. Then comes a muffled bark as Quore’s resident office dog, ChiChi, makes her way to Hotel Success Manager Suzanne Perry’s office for her first treat of the day. She has to start the day off right, after all.

Scott Schaedle, the founder and CEO of Quore, brings his chihuahua ChiChi with him every day. But she’s far more than the boss’s dog (in fact, ChiChi might argue that she is actually the boss around these parts, but we’ll get to that). And while ChiChi might be small, she has become a huge part of Team Quore.

She wasn’t always Scott’s dog—and she didn’t always have an office job. ChiChi used to be a  (sometimes) loyal house pet before she made her way to Quore’s Franklin, TN office. But once she got the job here at Quore, she never wanted to leave. And we couldn’t imagine a day without her colorful personality.

To understand how and why ChiChi got her position at Quore, we have to go back to Christmas of 2007, when Scott presented his wife, Anna, with a small, barking present. Even though ChiChi was originally a gift for Anna, Scott grew quite fond of her himself. He called her his parrot for awhile because, when she was a young pup, she would jump up on the couch, climb on the back, lay on his shoulder and watch TV with him. As a puppy, she was extremely loving—to certain people, anyway.

“Many people I know have bought chihuahuas because of ChiChi,” Scott says. “Those people no longer own chihuahuas...” he adds, trailing off slightly.

Things went well having ChiChi in the Schaedle home until 2013, when Scott and Anna had their second child. Caring for two small children and a wild chihuahua on top of it all became a bit too much for everyone.

“ChiChi is more needy than an infant,” Scott says, with ChiChi grumbling in the background.

Scott decided that, instead of trying to rehome his furry friend, he’d take her to work with him for a little while to give his wife a break. He didn’t know how it would go at first, or how ChiChi would be received. But the response was a positive one—both from early Team Quore members, and from ChiChi, too.

After she gets her morning treat, ChiChi makes her rounds about the Quore office. She has to check on all of her employees to make sure they don’t need anything from her. And she likes to make sure she’s picked up any treats that are waiting for her at various desks. Once she’s checked on everyone, she usually makes her way back to her office (also known as “Scott’s office”) to get her beauty rest before her favorite time of day: lunch.

Right around 11:30 AM, ChiChi rolls out of her little bed. She pops her head out of her little built-in doggie door and heads to the lunchroom to make sure she doesn’t miss anything—just in case anyone wants to share their lunch with her. She especially perks up when Scott orders Jimmy John’s, her favorite treat.

She hangs around the lunchroom for a good while, popping in and out to check on things and make sure she doesn’t need to clean up any dropped food from the floor. Then she heads back to her office for her evening meetings, popping back in through her little door.

The door was built into Scott and ChiChi’s office when the construction team was working on building out Quore’s new office. ChiChi really hates closed doors, and when Scott had meetings in their shared office, she would scratch on the door constantly to be let in or let out. While Scott was meeting with the contractors for the new office, she was scratching on the door, so he asked if they could put in a little door for her—and the rest is history!

The Furry Heart of Quore

It’s true. People love ChiChi—even though she doesn’t necessarily love everyone else. Having an animal in the office changes the mood. Her role here at Quore could be called Chief Moral Support Officer… if she didn’t already think she was the actual founder and CEO. When people are having a rough day, they go find ChiChi and snuggle with her (if she’ll let them).

She’s the bright spot in a lot of people’s days: “My favorite part is taking her on her long walks in the morning,” says Office Concierge Amanda Haman.

But ChiChi doesn’t just provide moral support. She also cleans up dropped food, barks to alert us when there are visitors she doesn’t recognize (and sometimes visitors she does recognize) and she’s even helped Scott to conduct meetings and webinars. She’s such a Quore staple that she was written into the lease here! Whether she loves us or not—somehow, all of us still love her.

Except maybe Director of People Operations, Jena Garrett: “ChiChi is actually the worst.”

But secretly we all think Jena still loves her in her own way. Most of us do. She’s a little old now at thirteen in human years; she’s a little cranky; and she likes things done the ChiChi way only. But her personality brings something special to the Quore office, and when she graces you with a cuddle, it’s really something special.

“She’s such a small little thing, but she has a big presence,” says Denise.

Team Quore agrees, and we’re glad this little dog is around. It wouldn’t be the same without her.

To learn more about Quore’s culture and team, take a look at our other blog posts or follow us on Instagram. To find out how Quore’s solutions work to streamline hotel processes, check out our website.

A New Way to Navigate Quore

How to Promote Wellness at Your Hotel Without Extra Expenses